If you’ve read my blogs before, you’ll know that I love live music, whether that’s big, well-known bands or smaller, up and coming acts. Last year, I had my first taste of a music festival when I went to V-Festival for the day. I saw some of my favourite artists and caught the festival bug and couldn’t wait to do to it all again. But this time around, I wanted the full festival experience, camping and all! So we booked tickets for Y Not Festival in Derbyshire.

Y Not was celebrating it’s 12th anniversary with the Stereophonics, the Vaccines, Feeder and Two Door Cinema Club headlining over the weekend, alongside talents like Frank Turner, Jake Bugg and Clean Bandit too. The line up looked amazing… so we thought, why not?! The whole experience was an adventure from start to finish. With four of my best friends in tow (Emma, Dan, Kieran and Gez), we set off on Thursday morning to head for the Peak District. The boys were driving there in the camper van and me and Emma were in the car… but before we even started our journey, we discovered that the camper van had failed its MOT. Not the best start!! But Kieran (being the muppet that he is!) hadn’t realised the MOT was due that very day, so we waited for it to be tested and have some quick repairs before we finally set off a few hours later than we had planned. 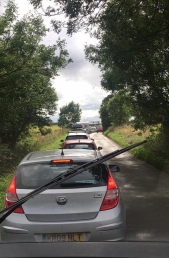 that we missed our exit junction and ended up taking a bit of a detour. The boys had no idea, thinking that we were still driving ahead of them, so they carried on. That was all just fine, until our sat-nav cut out and we accidentally ended up on the M6 toll road. When the sat-nav kicked back in, we soon realised we were on the wrong route and turned off the M6. We stopped to pay the toll…and that was that. The car didn’t start up again! The stop-start feature had kicked in, the engine had turned off and the battery was completely dead due to a fault with the alternator. We were stuck at the toll and had to roll the car away and stop at the roadside until the AA came to our rescue and jump-started the car. We didn’t really know where we were and we had no idea where our friends were, but after about an hour, we were on the road again and on our way to find the boys.

So our journey was pretty eventful and took far longer than planned, but we eventually caught up with the boys who were waiting at a nearby petrol station and we continued together on our way to Derbyshire where we discovered the Y Not Festival nestled in the rolling hills of the Peak District. We wasted no time in setting up camp because we couldn’t wait to chill out after our stressful morning on the road!! 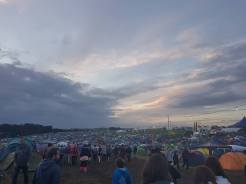 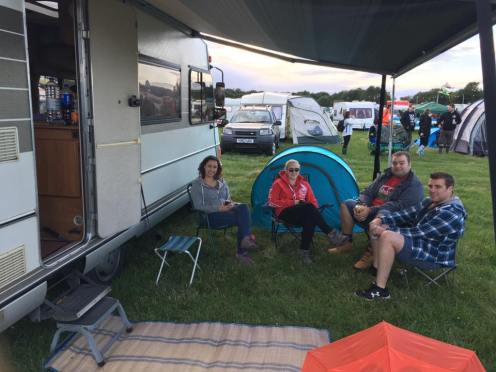 We found a good spot in the field, parked up and popped up the tent before making our way to the festival ground to explore what was on offer. We walked through a sea of tents to be greeted by all the food stalls and trucks that a foodie like me could dream of. There was pizza, paella, pancakes, Mexican, Indian and more. It’s safe to say that we were spoilt for choice and certainly wouldn’t go hungry!!

The atmosphere was lively and everyone was covered in glitter and excited about the music-filled weekend ahead, which got off to a fantastic start with Feeder headlining Thursday night on the main stage! Emma was up on Dan’s shoulders with a great view over the top of the crowd. We had a ball before heading back to the camper van, tired but happy after a day of ups and downs, ready to hit the hay before another fun-filled day!

Waking up on Friday morning, we soon realised that the Great British weather was not on our side. It rained and rained and rained. All day! I felt sorry for everyone arriving and setting up their tents in that weather, with the paths getting steadily muddier and more slippery with every rain drop and foot-fall that passed. We were lucky to have the camper van for shelter. But we hadn’t travelled all that way to sit in the camper van playing cards. So we got togged up and braved the downpour. When you’re camping, it’s not easy to get things to dry out, so we did our best and improvised with plastic bin bags and a bright yellow poncho to keep off some of the rain. We looked a sight and we still got soaked through, but by the time we were there among the crowd and enjoying the music, being drenched and splattered with mud was the last thing we cared about.

We spent Friday exploring a few of the different stages around Y Not, where we saw some new acts and danced along to good old favourites throughout the day and night, despite the on-going rain. We discovered a brand new band on Arnies stage called Charlie and The Villas – Their songs were chilled out and catchy, getting us in the mood for more music. We then watched the hilarious and eclectic Everly Pregnant Brothers on the Quarry stage, with their imaginative parodies making the whole crowd laugh aloud. Our particular favourite was of course “Chip Pan“, sung to the tune of Kings of Leon’s “Sex on Fire”. (Take a listen if you fancy a laugh!!) 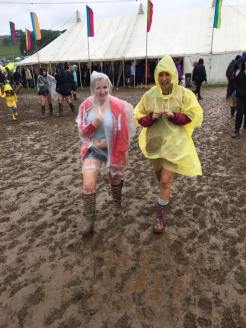 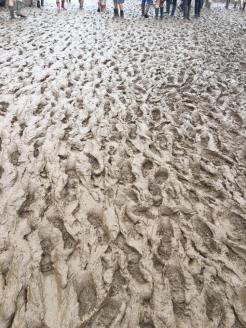 Next up, we trudged through the thickening mud to enjoy Clean Bandit performing on the Big Gin Stage!! Knowing almost all of their songs, we were singing and dancing in the rain, having the time of our lives and getting covered in mud, before retreating to the cover of the Quarry stage to see Frank Turner and to take shelter from the rain for a while. We thoroughly enjoyed his set too – a mixture of folk and rock – before making our way back to the camper van to catch forty winks. 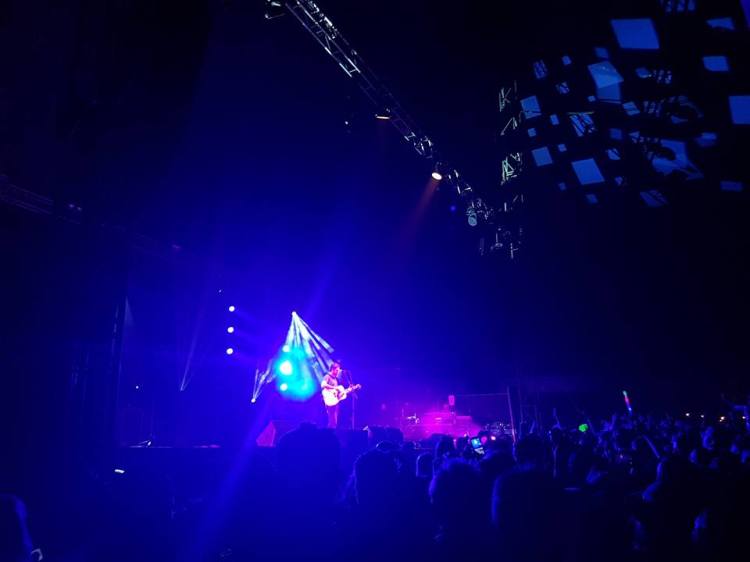 Getting back to the camper was an adventure all by itself. Our wellies were getting stuck in the mud and people were slipping and sliding all over the place. Some poor people’s tents were being submerged in mud. I have never seen mud quite like it! You’d have to see it to believe it! We just hoped that the weather would be kinder to us on Saturday!

And thank goodness it was! The rain continued a bit in the morning but cleared up enough for us to venture out (without being wrapped in bin bags) for more festival fun. The mud was just as bad, but so what?! It will all come out in the wash!

We started the day off with a new act on the main stage called Deco, who’s Indie-pop sound echoed Duran Duran. This was followed by a BBC Introducing act called Bud, with her folky summer songs, and then another new one called Outlya, who were said to be similar to Bastille and Coldplay, so I was bound to like them too. They were all different genres, but all extremely talented and enjoyable. But the best acts were yet to come.

Gracing the main stage on Saturday night, we were excited to see Jake Bugg and the Stereophonics, who were the highlight of the whole festival for me! All five of us love the Phonics and we couldn’t wait to hear all of their greatest hits. They didn’t disappoint! We were singing along and dancing to their old and new songs and we had a great spot close to the stage too. The crowd was vibrant and everyone was clearly having an amazing time. We even carried on dancing in the muddy arena after the firework finale, before returning to our camp for the night through the quagmire of mud! 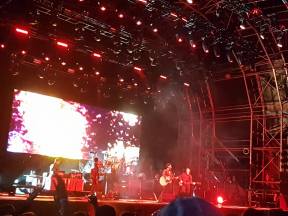 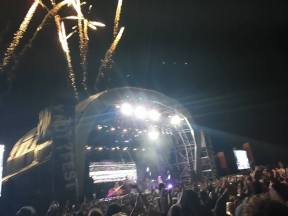 Sunday was looking to be a sunnier day. We woke up to clearer skies, but also the sad news that the final day of Y Not had been cancelled due to safety concerns following the appalling weather. The rain had been pretty horrific and the slippery mud was treacherous, but we had made the best of it and got out to enjoy as much music as we could over the past few days. So despite our disappointment at missing out on Two Door Cinema Club, Maximo Park and Kate Nash, as well as various other musical acts and comedy performances too, we packed up the van and made our departure in the knowledge that we had enjoyed a fantastic festival and made some wonderful memories to take away with us.

I could tell you so much more about our Y Not Festival adventures but this would turn into the longest blog ever!! We experienced some porta-loo horror stories (poor Gez & Kieran can never un-see or forget certain things!!) and we created elaborate Guardians of the Galaxy costumes which we never got to wear because of the rain and wind. We were pulled out of the mud by tractors and I was even making plans to leave early (because I wrongly thought that I was starting my new job the very next day). We had an adventure in every sense of the word and we are already planning our next music festival.

Thanks Y Not!! I think we are prepared for any and every festival after last weekend!! Let the mud clean up operation begin…

One thought on “Muddy Fun at Y Not Festival”