I’m lucky to say that I have now seen most of my favourite bands and music artists perform live in concert or at a music festival, including the Killers, Adele, the Script, Imagine Dragons, Sia, the Kaiser Chiefs, Stereophonics and more. However, Ed Sheeran seems to have evaded me until now.

I have enjoyed Ed’s music ever since I first heard “A Team” back in my Sixth Form days, and then his “Multiply” album became a favourite of mine for quite some time while I lived in London. I was excited to hear his latest album – “Divide” – when it was released, and I soon had it playing in my car on the commute to work every day, with the tunes getting stuck in my head. I really wanted to see Ed Sheeran live after that and my opportunity came around just over a year ago.

Tickets were booked without hesitation (except for the price, which was more than any other concert I’ve paid for before!) and the countdown began. The year’s wait went surprisingly quickly, and we were getting ready for the gig before we knew it. Friday night concerts are always a great end to the week. It got me through work and my training course by giving me something to look forward to at the end of it all.

There were a couple of support acts at the gig – Jamie Lawson and Anne Marie. I am familiar with them both, but I have to admit that I really wasn’t there to see them. However, they did a good job of warming up the crowd and Anne Marie’s songs are pretty catchy too!

I haven’t been to a gig in the Millennium Stadium (a.k.a the Principality Stadium) for many years and I had forgotten quite how big it feels inside. It certainly has a different vibe to a rugby match and it was amazing to see around 60,000 people filling the seats and pitch, who were all there to see Ed Sheeran perform live, just like me! It is impressive that Ed’s tour managed to fill the stadium 4 nights in a row too. 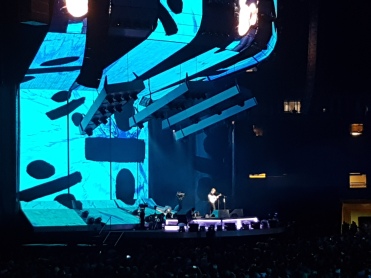 We had standing tickets, but lately at every concert I go to, somebody inevitably spills a drink (a whole pint of beer!!!) in my hair, which is not a fun experience. So, although we had standing tickets, we decided to take advantage of the free seats available around the pitch to avoid any spilling drinks and wild fans. This was actually a good move, because we had a great view of the stage, right over the top of the crowd and we were also close to the front too. 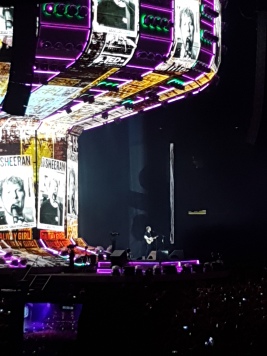 When Ed Sheeran finally came on stage, the crowd erupted (I was thankful for the safety of my seated area!!). He went straight into his first song without giving any clues and this is the part I was most looking forward to. I have never been to a concert before where there is just one person on the stage in front of such a huge crowd. There was no band or backing singers behind him, but this didn’t daunt Ed. He started strumming his guitar and recording it using his loop foot pedal. He then built on this by tapping his guitar to the beat, then humming, then playing another chord and layering each new sound on top of each other with the loop. Gradually, each song built up and started to sound familiar and recognisable, just in time for Ed to start singing his familiar lyrics.

Each song was built up in this way and it was fascinating to see and hear. I know that not everyone is a fan of Ed Sheeran, but I think it takes a real skill to not only write songs, sing them and play an instrument, but also work with sounds and rhythms to create multi-layered music, solo! He was like a one-man-band up on that stage, with every sound created and played live to collectively deliver the sound you might expect from a group or band. Sometimes, the songs kept increasing and getting louder, to the point where I questioned how one person could possibly make so much sound?

Throughout the concert, Ed Sheeran talked to the audience and involved us all. He encouraged us to sing along and dance, and to enjoy ourselves without worrying that anyone was watching our (bad) dance moves or listening to our (out-of-tune) singing. When I looked around, it was clear that most people were doing this anyway. We were all enjoying the music and atmosphere and having fun, and it was clear to see that Ed was thoroughly enjoying it too. He seemed sincere and down to earth, thanking the crowd for being there and taking part and he played all our favourite songs and more. So, despite my initial reservations that the tickets were on the expensive side, I’m more than glad I booked them and got to experience such a different gig to those I’ve seen before. I can also finally tick another one off my bucket list!