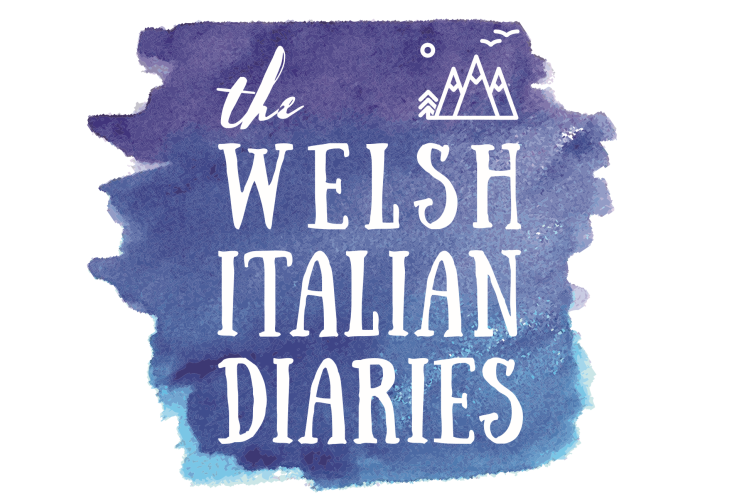 When I was walking to and from work last week, there was a hive of activity on the lawns in front of Cardiff City Hall. With event crews setting up bars and a stage and flag poles and portaloos, I didn’t know what was going on. But a quick google search later and I soon realised that Cardiff Big Weekend was back for the first time since 2011, run by Pride Cymru for the first time ever and adorned with rainbow flags to match. 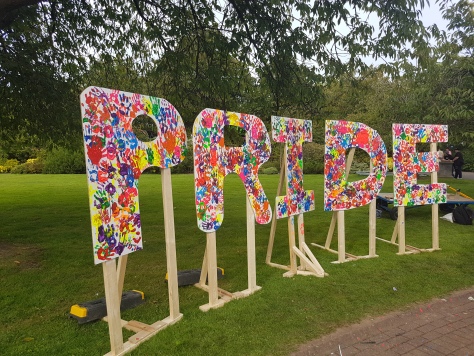 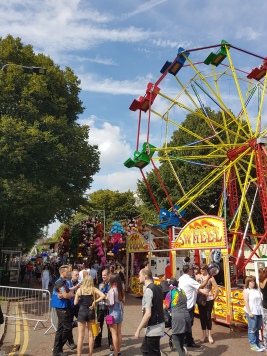 I went to Cardiff Big Weekend years ago and remember having a whale of a time with my friends at the funfair, whilst enjoying live music and eating lots of food. If I remember correctly, I think Gez was a little bit green after a bit too much fun on the rides and Dan went home with a life-size stuffed-dog toy that he won!! This time around, in true Big Weekend style, the funfair was HUGE! It had popped up outside my office in a spinning mass of flashing lights. On Thursday morning, I negotiated the rides and weaved through the funfair to reach my office, where I sat through an important meeting watching a helter-skelter tower appearing before my eyes outside the window. Unfortunately, I couldn’t pop out for a spin on the Waltzer or the bumper-cars during my lunch break because the event didn’t start until Friday, but I was keen to book tickets for the Big Weekend and wasted no time in doing so and making plans with Amy. 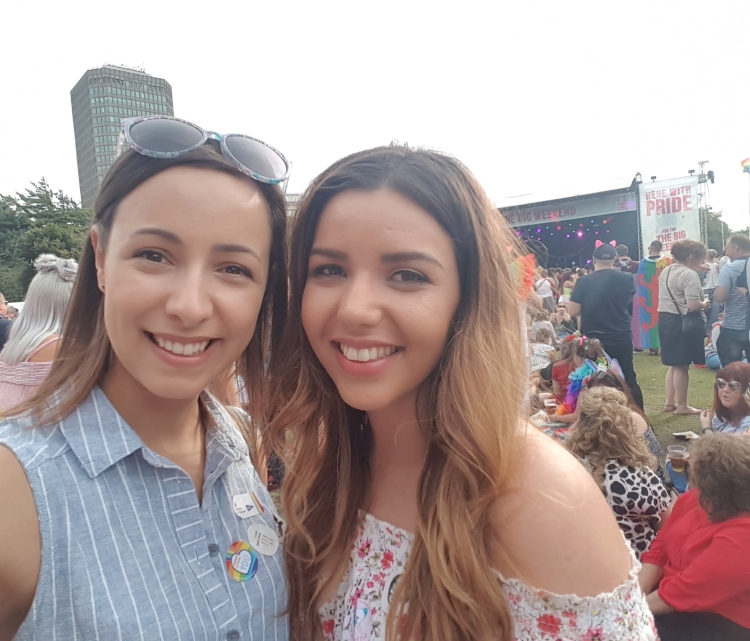 For just £5 for a day pass, the Pride Cymru Big Weekend was running over three days, offering live music, street food, bars, fairground rides, entertainments and of course the colourful Pride parade, making the event bigger and better than ever before. Combining the Big Weekend with Pride Cymru meant that this year, there was an underlying message of equality, diversity and love. Me and my friend Amy were ready to let our hair down and have a good time along with everyone else, although our outfits were certainly not as flamboyant as some of the other revellers!!

We arrived fairly early (amongst crowds of high-spirited, enthusiastic teenagers wrapped in rainbow flags and fancy-dress clad adults with multi-coloured dogs) and managed to avoid the queues as we headed to the stage area to enjoy the festivities. Amy had just returned from a holiday, so we were busy gossiping and catching up and I can’t really remember who was on the stage. But the atmosphere was vibrant and it was nice to have live music playing in the background, surrounded by hundreds of people having a good time in the sunny Welsh capital. We bought ourselves some refreshing ciders from the bar before going for a wander around to see what was going on at Cardiff Big Weekend. 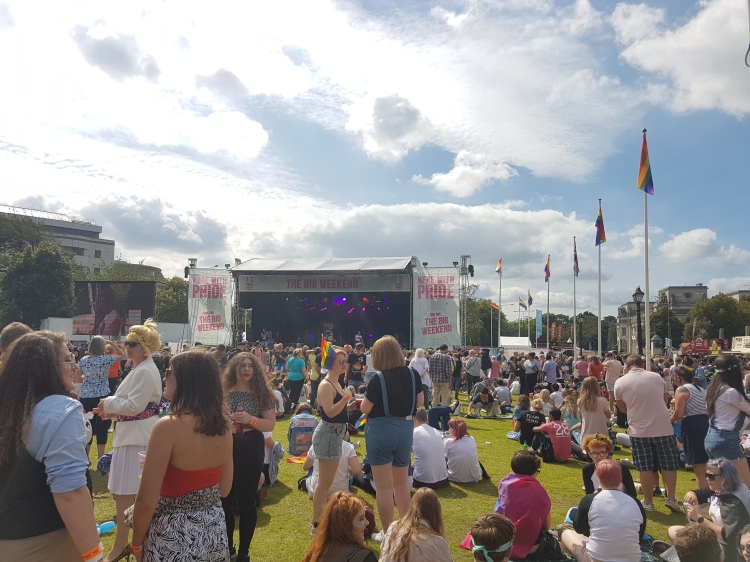 There were numerous stalls dotted around the festival, from charities like the RNLI and RSPCA, to entertainment venues like the Glee Club (which me and Amy plan to visit soon!) and the National Museum Wales. They were all giving out rainbow inspired stickers (I collected quite a few) and other freebies, but the National Museum caught our eye the most. They were giving out canvas bags with an illustration of a dinosaur on them and a handful of coloured pens to add your own touch of creativity to your bag. We certainly didn’t expect to be sat in the sunshine, drinking cider and colouring in dinosaurs at the Big Weekend, but we got stuck in and had so much fun being big kids again. And I’d just like to add that I’m very proud of my latest artistic creation!!

We continued the feeling of being back in our teenage years with a few rides at the funfair. We soon felt giddy and dizzy from all the spinning and whirling rides (and cider), and Amy was just a little bit frightened by the hilariously bad ghost train that I laughed all the way through as she screamed with fright!! So to make us feel better (or in my case, sicker…) we devoured a bag of fluffy candy floss each while enjoying more live music in the sunshine. I regretted the candy floss when I was only half way through the bag, but I refused to be beaten by it and made myself eat the lot because it was outrageously expensive for a little bit of spun sugar!! 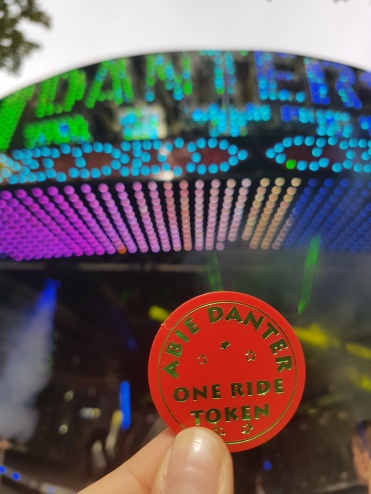 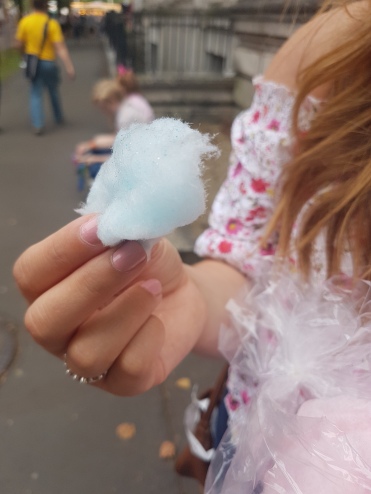 Talking of expensive, I couldn’t exactly go to an event like this without wanting to enjoy some food as I always do. So Amy and I bought chicken wraps which cost us a whooping £7.50 each and were very messy to eat. In fact, Amy managed to get barbeque chicken on her shoe. Her clean white shoe!! And being the good friend that I am, I just laughed at her as I got covered in chicken too.

We had a fantastic time at the Pride Big Weekend, despite not seeing the parade or most of the live music acts. There was just so much going on that we were spoilt for choice and time was flying by as we had fun. The event went on into the evening, but having arrived early, our feet were already sore and we were tired, so we left while the party continued into the night. I can’t wait to see what the Cardiff Big Weekend 2018 has in store!

5 thoughts on “Welcome back to Cardiff Big Weekend 2017”